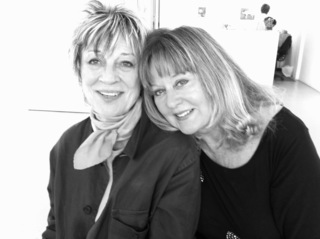 Carole and her mother at DUI conference

Friends at book signing at Willow Grove, B&N, in Pa.

Carole at a reading at Devon B&N, Pa.

Poster announcing Carole's reading and signing at B&N in Devon 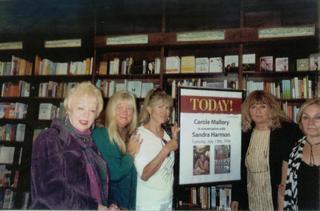 The original jet set Meet the women who flew the flirty skies-October 13, 2011

Young "stews" like Carole Mallory (above) and Lorraine Veve Roy sought freedom and even husbands in the sky —but often faced sexual harassment and mandatory weighins instead.

Last month, ABC premiered its new show, "Pan Am," a 1960s period drama chronicling a coterie of Pan Am stewardesses and pilots in a campy spy plot that, while admittedly cheesy, examines the sexism and struggles of young women of the era. While critics have responded to the show with a resounding "Meh," the show has struck a chord with employees from the airline's golden age.
Like many women on the show, being a stewardess offered a chance to see exotic locales or just escape the routine of their everyday lives.
Carole Mallory was engaged to be married to a man she remembers as "all-American." At the time, she was teaching at a high school, where she wasn't much older than the students. The illness of Mallory's father also weighed heavily on her.
"I felt stifled," she says. "I wanted to get away."
These things, plus a desire to travel, led Mallory to cut loose and join the league of glamorous jet-setters known as Pan Am stewardesses.

An event was held at 82nd and Broadway Barnes and Noble in NYC at which author Carole Mallory was interviewed by author Sandy Harmon about LOVING MAILER and its relationship to Mailer's writing.

Carole read from and signed copies of LOVING MAILER at B&N in Devon, Pa.

On January 27, 2011, Mallory will give a lecture in Manhattan at the Gerson Cultural Arts Series at the National Council for Jewish Women created by Eleanor Roosevelt. Her lecture will be on Norman Mailer and how LOVING MAILER relates to his writing.

After Mallory's PARADE COVER STORY about her journey overcoming alcoholism was published, she was flown from Hollywood to her alma mater, Pennsylvania State University, to lecture for the organization Drivers Under the Influence to mothers who had lost their children to drunk divers. (M.A.D.D.)

Inspirational lecture to residents of nursing homes inluding pet therapy titled TRAVELS WITH SIR WINSTON who was Mallory's toy poodle. They were employed by:

Currently Mallory is performing an interactive lecture with her new ten lb Maltese called"Travels with Monsieur Herbert" and traveling to retirement communities with hopes of inspiring residents with stories from her life and how she overcame obstacles which has made her resilient and empowered her. She hopes to capture this resilience in her talk and project onto others with hopes of instilling a will to live.